Nowadays, hundreds of millions of people visit the Google homepage every day, that’s without counting Google plus, and the other subdomains.

This search engine dominates at least 85% of the total search market, where Yahoo, Bing, and others are fighting to keep their few million visitors. The big question here is why Google succeeded? And what’s the real secret behind Google?

The Google algorithm is smarter than the others, that’s clear and only people who used Yahoo before Google’s launch can understand that clearly. It was very difficult to find a few relevant results and Yahoo was a directory more than a search engine.

In the times when Google started crawling links in the United States, things had changed completely and people noticed an amazing change and a big difference in their searches.

Google was created to crawl the web, find links, and understand its structure. It is a way to build itself, while Yahoo and the others used their so-called “directories” and they got money from people just to list a link. Is that a business? No, of course, is that trust? No, also.

When people search the web for relevant information or browse your directory, they need free advice and not make money from them. In other words. In the first days of Google, people felt like they are getting advice for the right place.

The Google algorithm is not the main reason for their success. A company can develop and create a smart program if they select the right people from around the world. Google engineers work hard to ameliorate their algorithm and make it the best.

If you look at Google’s first homepage when they launched the site in the year 1998, you will notice immediately that it contains only the basics, the famous search box, and some links to learn more about the company.

No one else at that time believed the fast searching results compared to other search engines. The page loading time reduced significantly the time to find the right result.

When people visit Google, they get results with professionalism, at the same time, yahoo was showing banner ads and a directory listing. Yahoo is not smart enough to understand the search, and give suggestions, they used and continue using the directory as an alternative if someone got the wrong results or no results at all.

Read also:  How to Make Money with Affiliate Marketing for Beginners

All that was in 1998 and the Google competitors had the time to speed up their homepages and make them clean. However, it’s the same mistake in Yahoo until now. The Yahoo homepage is loading slowly with big mistakes in their designs, I don’t know how they use that structure, which gives a negative impression to the visitor.

Lots of links everywhere you go, lots of images that load slowly, and a website that looks like anything else, but not a search engine. 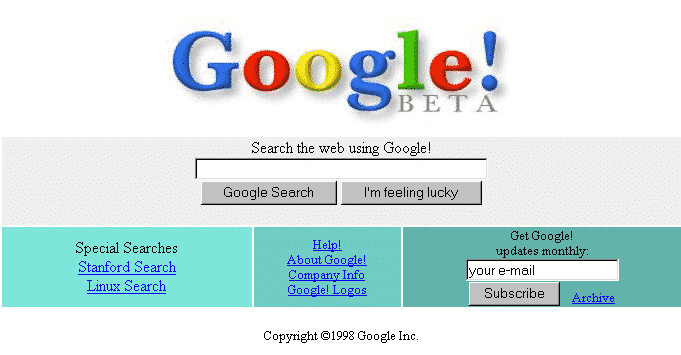 The same thing applies now for Bing, the homepage takes more time to load, and they added a daily photo to amaze their users. But, they forget that visitors want to find results and browsing photos. There are lots of photo sharing places and they can visit them when they need. However, Bing still showing that homepage!!

The main idea here is that Yahoo, Bing, and the others “forgot” that they are search engines and not websites. They took the wrong way in the first contact window with the user, it’s the homepage.

If you want to tell people who you are as a search engine, prove that on your homepage first, then, the visitor will become a fan if you offer something different and better.

Google Adsense was the fuel

At the beginning of this century, few numbers of bloggers and website owners were unable to monetize their content, but the launch of Google Adsense in 2003 made things different, and it becomes a strong business in a few weeks.

That program opened the big doors for bloggers to write more. Adsense was a catalyst for the entire web, but also, for Google itself. While yahoo is unable to offer a smart search result and they were working on a directory listing and direct ads. Google built a business that generates millions of dollars to develop the company and dominate the search market.

When Google started making millions from simple and clean ads, they started other projects and businesses such as buying YouTube. They have an unlimited money generator when helping people to find answers to their questions.

Google builds a strong business while the other makes money

A smart search engine gives results based on the search queries and the algorithm structure. There is no need for any other tool.

If Yahoo offers a directory listing today, that proves that it’s a way to make money because they are losing the search engine market every day, the same thing applies to others. A search engine needs to prove its smart algorithm by crawling the web and read between the lines.

Now, Google finds new websites in a few days, even, if they are not linked to any other site. That’s a big challenge, and it’s not easy to achieve such an advanced goal. At the same time, Yahoo, Bing, Ask and the small others are in a long sleep period. You need to submit your link and hope to get a few visitors from them.

Yahoo and Bing are using the same platform today. They wanted to compete with Google, but they failed and they will fail again if they still think the same way. The search engine is not a page with ads and stupid ideas, it’s smarter than that.

Google is a smart business

I want to ask you something, how many visitors your site receives from Yahoo, or Bing, 1%, 3%, or even more?

Anyway, think about numbers, Google makes money from smart and relevant ads on the search results page. That’s without talking about Adsense and YouTube. Just estimate the percentage of Yahoo’s earnings from the search ads and compare it to Google.

Google is a business that builds its own market and makes it the largest one. They worked during the years to develop and innovate algorithms and ideas, and they are today big and successful thanks to their hard and smart work that built a business that can’t fail.

Google created a strong base for their business, a powerful and the most advanced search engine today, all the other things are nothing compared to the Google algorithm. It’s a smart way to build a business the right way. YouTube and other websites can’t succeed without the main Google core.

Today, YouTube itself is a search engine, the biggest Video search engine. What makes Google successful is more than tactics, but also smart business.

The Google page rank played a significant role in the ranking structure. It’s not only a formula to conclude a number, but it’s what gives Google more power in the past 10 years. Now, the Page Rank lost its weight, but the smart results were based on some page rank.

Read also:  How to Send a Test Email in MailChimp

The PageRank itself is not a thing to talk about, but it proves that Google is the only search engine that works really to understand the web and rank websites, based on complicated structure. Google cares about the link and the behavior, while the others were ranking pages on poor algorithms.

Google founders, team, and the entire organism worked together to build a strong business based on a smart equation, includes the algorithm, the speed, the user’s experience, needs, and other factors, such as an unlimited source of money like the Google Adwords to power the Google success.

These are the main factors, that made Google so successful, and no other search engine can compete with it actually.

Fathi Arfaoui is a Physicist, Blogger and the founder of Trustiko.com. He shares Business, WordPress and Blogging tips to build a better blog and succeed online.